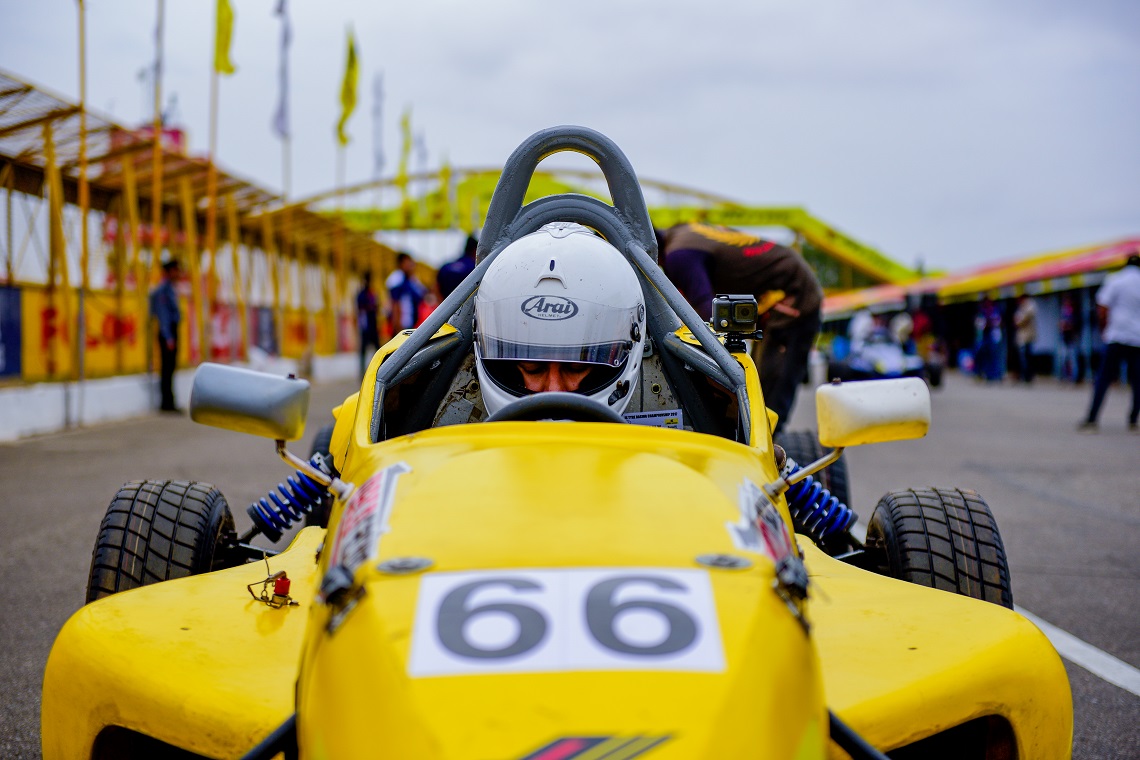 Coimbatore,  8th July 2017:Chennai’s Vishnu Prasad made a sensational debut in the Euro JK 17 category, winning both the high-profile races on the opening day of the 20th JK Tyre FMSCI National Racing Championship here at the Kari Motor Speedway on a warm but cloudy Saturday afternoon.

Vishnu, the defending LGB4 champion, who began at P4 after a few qualifying concerns, came up with a stunning opening lap in Race 1 of Euro JK 17. He stormed past the three cars ahead of him and held on to that advantage all through the race. In Race 2, he took full advantage of his pole position to ward off the stiff challenges that were brewing behind him for a grand double.

“I got a decent start in Race 2,” Vishnu said, just after the day’s proceedings. “I am getting used to the car and slowing getting better,” he added.

Defending champion Anindith, in fact, from Hyderabad was the fastest racer of the day. He set the pace in Race 1, with a speedy 1:00.911 minutes; he was even quicker in Race 2, with a burst of 1:00.695 minutes. That was, however, not good enough as he just couldn’t find a way past Vishnu in either of the races. He had to settle for the second place in Race 1, while in Race 2, he failed to grab an opportunity to even take the lead, and slipped to the third position.

Mumbai’s Nayan Chatterjee will also feel disappointed after having a brilliant qualifier. He took the pole but yielded ground to Vishnu and Anindith in Race 1; he did better in Race 2 but, again, couldn’t unnerve Vishnu into any error.

The two foreigners in fray, Paolo Ippolito from Italy and Ricky Capo from Australia, showed good pace to make a good early impression. Ippolito finished fifth and seventh while Capo took the eighth place in the second.

In the action-packed LGB4, Chittesh Mandody of Avalanche Racing rode a calm and controlled race to win the opening race of the season. The Kolhapur lad took the pole in the morning and also recorded the fastest lap, taking just 01:11.097 minutes in the twelfth lap. Veteran driver Diljith TS of Dark Don Racing finished second while Saran Vikram, a private racer, took the third place.

The JK Tyre Suzuki Gixxer Cup turned out to be an exciting affair, with as many as 22 riders, who were handpicked from selection rounds around the country, lining up just after lunch. Chennai’s Joseph Mathew took the first position while Sanjeev Mhatre (Mumbai) and Lalmawipuia (Aizawl) took the other two podium places.

The Road to Rookie Cup won the loudest applause with virtually tiny tots racing astride powerful bikes. Sri Lanka’s Jaden Gunawardena proved to be the fastest but it was the Aizawl boys who stole hearts. Lalhruaizela and Lalnunsanga took the remaining two podium places.