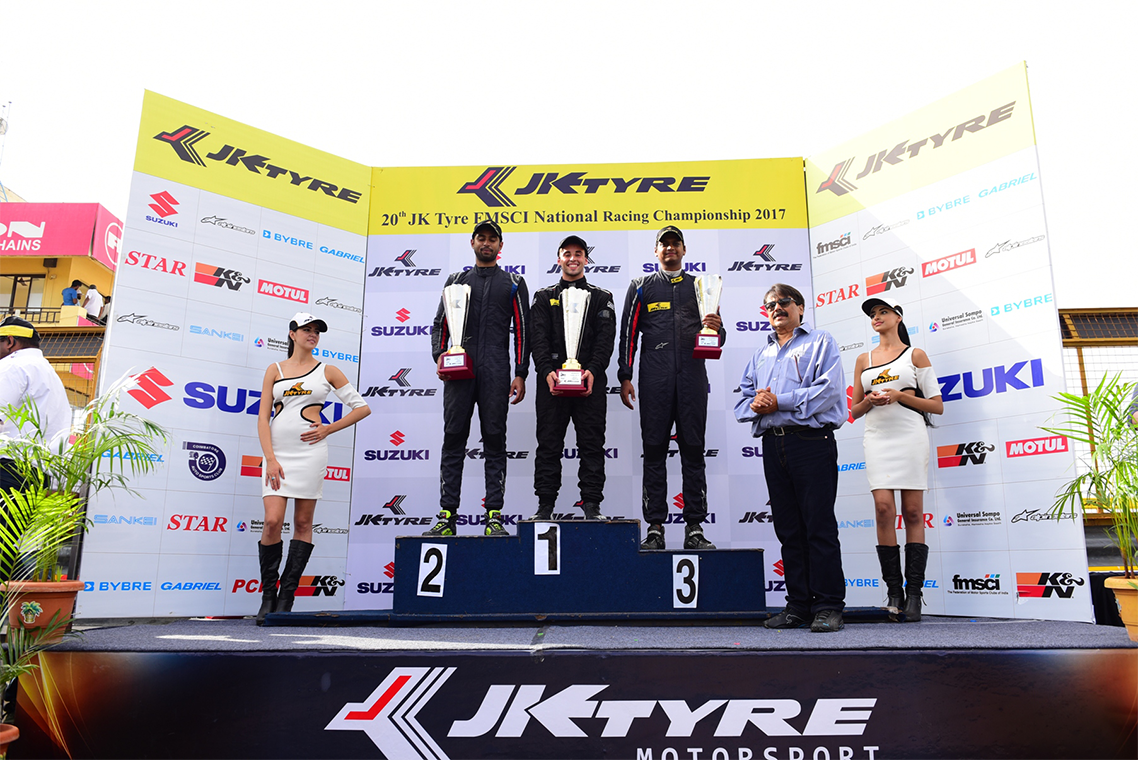 Coimbatore,  06th August 2017:: Chennai’s Vishnu Prasad held on to his lead in the prestigious Euro JK 17 after Round 2 of the 20th JK Tyre FMSCI National Racing Championship here on Sunday, despite enduring a mixed weekend.

Chennai’s Joseph Mathew too clung on to his position at the top of the table in the JK Tyre Suzuki Gixxer Cup, extending his winning streak to four in four races.

In the Red Bull Road to Rookie Cup, Sri Lanka’s Jaden Gunawardene continued to dominate, winning with a comfortable 3-second lead. But as he is not eligible to win the title, Aizawl’s Lalhruaizela stayed ahead in the championship race with 38 points.

The LGB Formula 4 saw a dramatic turn of events with leader from Round 1 Chittesh Mandody slipping to the 15th place despite winning Race 1. He was awarded a penalty of 30 seconds for an infringement which handed the victory to Sandeep Kumar of Chennai (Dark Don Racing). The second place went to Vishnu (MSport) and the third to Raghul Rangasamy.

Race 2 also saw the result sheet going topsy turvy, with two drivers from the Dark Don Racing team, including winner Diljith TS, being disqualified for not complying with homologation. That saw Vishnu emerging lucky winner. A couple of more infringements for overtaking during the yellow light saw Raghul Rangasamy taking the second place and Kevin Perera the third.

“It was a weekend to forget,” Vishnu declared, well before the LGB results were corrected.

He should be happy now even though he is only one point ahead on the Euro JK table, with 64 points in his kitty.

Vishnu began the weekend on a disastrous note, ending up with a DNF despite leading Race 1 all the way till the penultimate round. He made up dramatically in Race 2 by claiming the third position even though he had to start from the pit lane.

But defending champion Anindith Reddy (P4) and Mumbai’s Nayan Chatterjee (P3) were soon at his throat. Anindith, in fact, looked like he would get past him on at least a couple of occasions.

“I got off to a good start and thought I get past Vishnu too. But he defended really well,” Anindith graciously accepted.

“It was a tough race and I had to be at my best to ward off Anindith,” Vishnu said.

Race 2 presented a similar story, with Australia’s Ricky Capo jumping into the lead from P2. Vishnu from P6, Anindith from P5 and Nayan from P4 were quickly on his tail, with Anindith taking the second place midway through the race.

He upped the tempo at that stage and looked to topple Capo from the lead. But once again, it was a case of so near yet so far for him. Anindith, however, will be happy as he has 63 points now. Nayan stays at third position with 54 points.