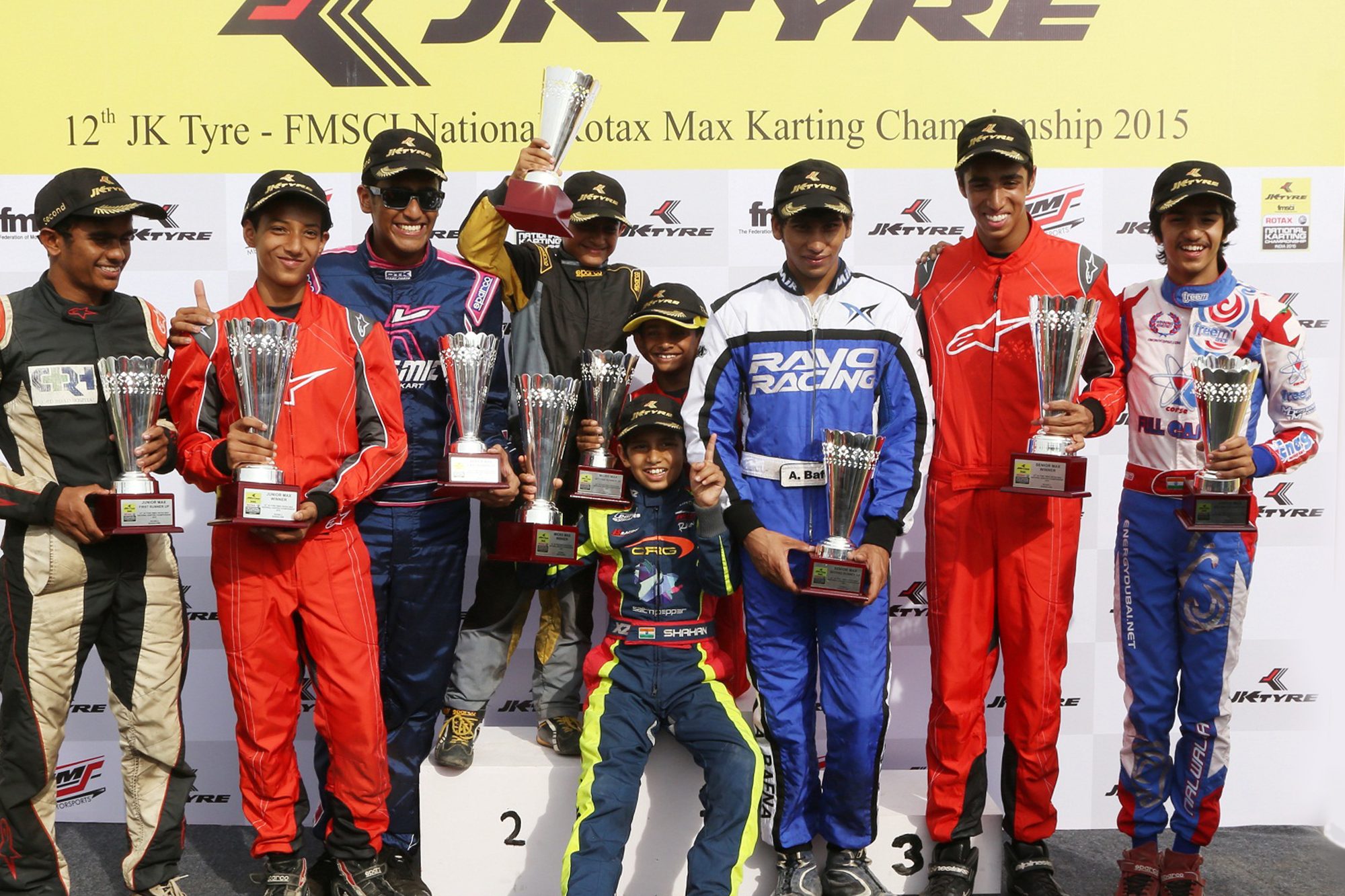 Meco Kartopia was hosting the National karting championship for the first time after hosting the JK Tyre-MMS Rotax Rookie Cup, which was held earlier this year. Spread over two days, the penultimate round was filled with speed and action, as the young karters from across the country put in their best efforts and fought hard to take the top three steps on the podium.

Meco Kartopia was buzzing with excitement as the heat races in the Micro Max category began. The tiny tots battled it out fiercely to finish first. In the end, it was Shahan from Agra closing in first followed by Nikhil Bohra and Ruhaan Alva both from Bangalore in the second and third place respectively. After a bumper to bumper 15 laps in the Junior Max category, Mohammed Nallwalla from Mumbai took the lead and took the chequered flag. Nirmal Umashankar from Chennai crossed the finish line second and Abhirath A Shetty from Bangalore representing Team Meco Racing was placed third. In the Senior Max category, the experienced Ricky Donison from Bangalore showcased some excellent karting skills and finished first. He was followed by Ameya Bafna who secured second place and Dhruv Mohite finished third in the Senior Max category.

Day 2 started off with the second set of heat races and Shahan yet again emerged first and clocked the best time yet again thereby sealing his first place on the grid for the pre-finals. . It was a tough fight between Nikhil and Ruhaan, however mid-way through the race Nikhil retired because of some technical snag and Ruhaan took over. He was placed second and was followed by Aditya Swaminathan from Bangalore in the Micro Max category. The excitement at the track soared when the Junior Max category race began. As the karters raced in full throttle, it was Mohammed Nallwalla who emerged first in the leader board. Nirmal Umashankar and Manav Sharma were placed second and third respectively. In the Senior Max category Ricky Donison put in his best efforts and his action packed performance placed him first. Dhruv Mohite crossed the chequered flag second and Nayan Chatterjee managed third place.

The pre-finals race in the Micro Max category saw Shahan, Ruhaan and Nikhil battle it out for the top three places. Nikhil was dominating the race however he was imposed a two place penalty as he caused a collision which worked in Shahan’s favour and he was declared first. Ruhaan came second and Nikhil secured the third place. It was interesting to see how the drivers battled it out in the Junior Max category. Manav Sharma and Nirmal Umashankar kept the spectators entertained with their superb racing skills. Manav crossed the finish line first and Nirmal second however the difference between them was less than a second. Abhirath A Shetty was placed third. In the Senior Max category, Ricky Donison put up a tough fight and his action packed performance left everyone thrilled. Nayan Chatterjee drove his place to second place and finishing third was Dhruv Mohite.

In the final race of Micro Max category, Shahan Ali Mohsin had a comfortable race as he lead from start to finish. The real battle was behind him for the second and third place. Nikhil gave a tough fight to Shahan however he could only finish second behind him. Ruhaan Alva from Bangalore secured took the third step on the podium. The race amongst the Junior Max category was an intense one. All was good until the 12th lap when Akash Gowda and Nirmal Umashankar collided with each other because of which Nirmal went off the track and had a minor accident. Manav Sharma continued to show off his aggressive streak and crossed the finish line first. Akash Gowda was placed second and Mohammed Nallwalla finished third.

The seasoned drivers in the Senior Max category raced wheel to wheel and in the end of 18 laps, Ricky Donison took away the chequered flag. He left the spectators wide eyed with his skills and it was an absolute treat to watch him race. Finishing second was Nayan Chatterjee and Ameya Bafna managed to cross the finish line third.

The fifth and final round of 12th JK Tyre-FMSCI National Rotax Karting Championship will be held in Bangalore from October 10-11, 2015 at the Meco Kartopia track.