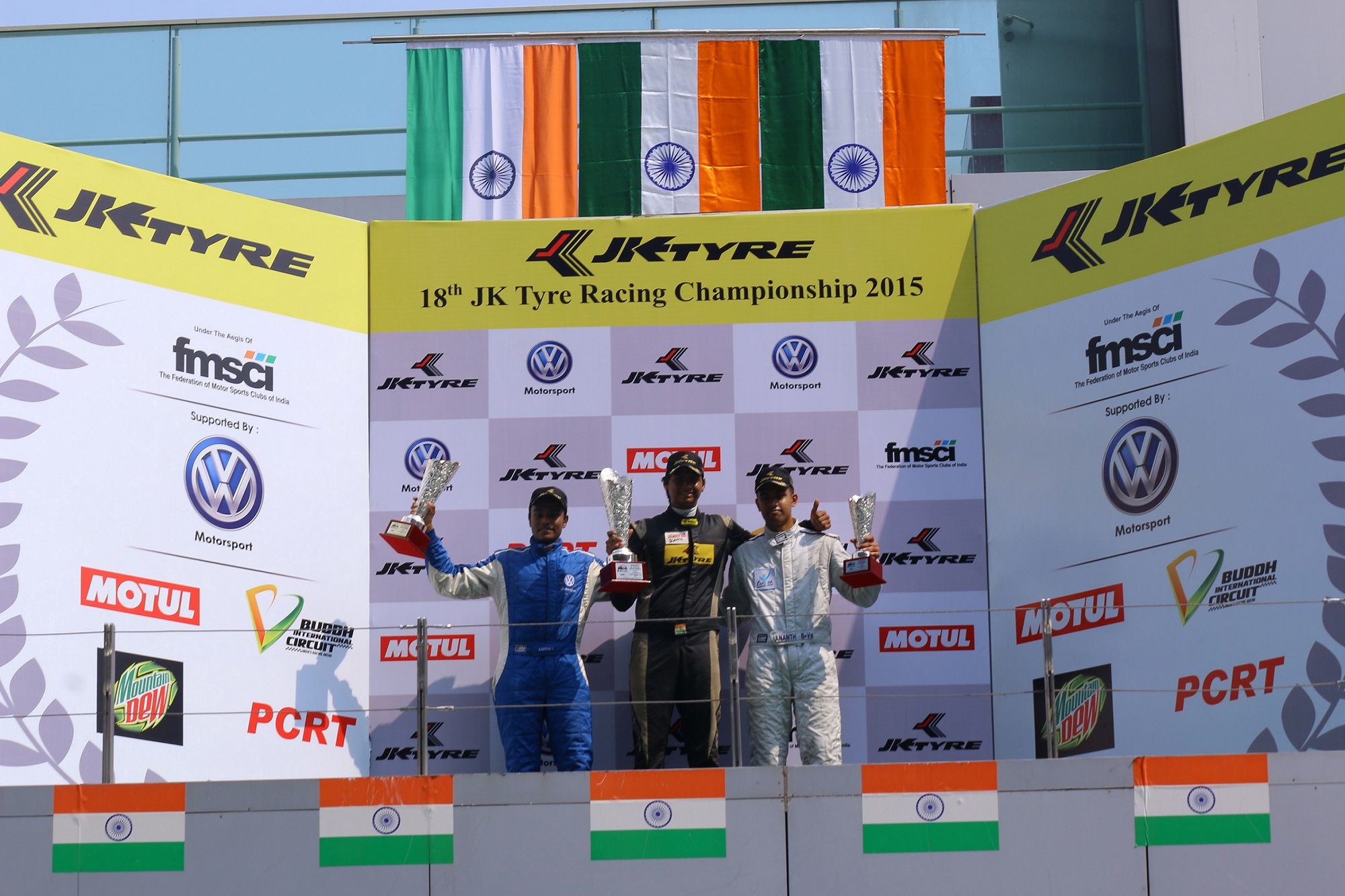 Greater Noida, October 18, 2015: Round 3 of the 18th JK Tyre Racing Championship came to a climatic finish infront of a packed house of fans who had come from all corners of Delhi and National Capital Region for a Sunday which was full of high speed action and entertainment. The 5.13km world class Buddh International Circuit put to test the driving skills and race-craft of the young drivers. The young lads provided enough and more action and extreme racing which kept the audiences enthralled all throughout the day.

The day included 2 races each of JK Racing India Series and JK Tyre-VW Vento Cup and a race each of Formula LGB 4 and JK Super Bike Cup.

In the JK Racing India Series featuring the JK FB02 cars powered by BMW Bike engines, the versatile Vishnu Prasad was back to leading the pack, despite starting on the fifth position. Akhil Rabindra and Ananth Shanmugam who started from the pole position at number one and two faced tough competition from the drivers behind them. Vishnu Prasad had a mixed day on Day 1 with a third place finish in the FLGB 4 category and a second place in the JK Racing India Series. He was very focused and in the very first opportunity moved up the ladder. International guest driver, Constantino Perroni was given ten seconds penalty for jump starting and despite trying really hard, he could just manage a sixth place finish. The surprise element was Karthik Tharani who made his way from the seventh place upto the second place. Ananth Shanmugham who had won the race yesterday had to settle in for a third place.

The last day of the race in the JK Racing India Series category started with a reverse grid and Constantino lead the pack from start to finish and recorded his first win of the season. Constantino, Ananth and Krishnaraj Mahadik raced bumper to bumper till the ninth lap. Ananth kept his second place intact despite tough competition from Krishnaraj. Vishnu Prasad followed closely and fought hard with Krishnaraj for the third place and eventually in the last lap Vishnu managed to overtake Krishna and took the chequered flag in the third place. At the end of ten laps, it was Constantino, Ananth and Vishnu taking the first, second and third place respectively.

In the Formula LGB 4, Rohit Khanna from Delhi representing Team Dark Don Racing made sure he made up for his loss of Day 1. Starting from the third place, Rohit had his eyes for the podium. However in the very first lap he fell behind one position but immediately in the second lap overtook two racers and thereafter for the next six laps lead lap after lap. He ensured that throughout the race he does not make any mistake that would have cost him his first place finish. Krishnaraj Mahadik who is also driving in the JK FB02 class made correct moves and after an intense battle with Sudarshana Rao he finished second in the race. Vishnu Prasad starting from tenth place forged ahead and at the end of eight laps managed to take the third step on the podium.

Delhi boy Karminder Singh drove flawlessly to win the first race of the day and was back in contention in the JK Tyre-Volkswagen Vento Cup 2015. The fight was between the three title contenders-Karminder, Anindith Reddy and Ishaan Dodhiwala and the trio fought till the end to make it first to the chequered flag. The second race of the Vento Cup, Anindith Reddy had a clean race and at the end of 10 laps he took the chequered flag followed by Ishaan and Sailesh who took the second and third step on the podium respectively.

The JK Super Bike Cup witnessed over 30 riders line up the grid. In its second year, this category has received a huge response from the audiences. Due of an accident the race had to be restarted. Delhi boy Bhupinder Singh finished first on his Yamaha R1, closing in second place was Simran Jeet again from Delhi on his Kawasaki Ninja ZX10R and Manmeet Singh from Ghaziabad finished third on his BMW S1000.

A foot tapping performance by the popular DJ Sumit Sethi and his explosive crescendo band kept the audiences enthralled with their explosive music ‘on the wheels’ as did the world class stunt shows performed by India’s finest racers and bikers.

As Round 3 came to an end, the drivers will now get a month’s time to gear up for the last and final round of the 18th JK Tyre Racing Championship which will return to Buddh International Circuit on November 28-29, 2015.

The championship is run under the aegis of Federation of Motor Sport Clubs of India (FMSCI) and Motul is the official lubricant partner to the championship.