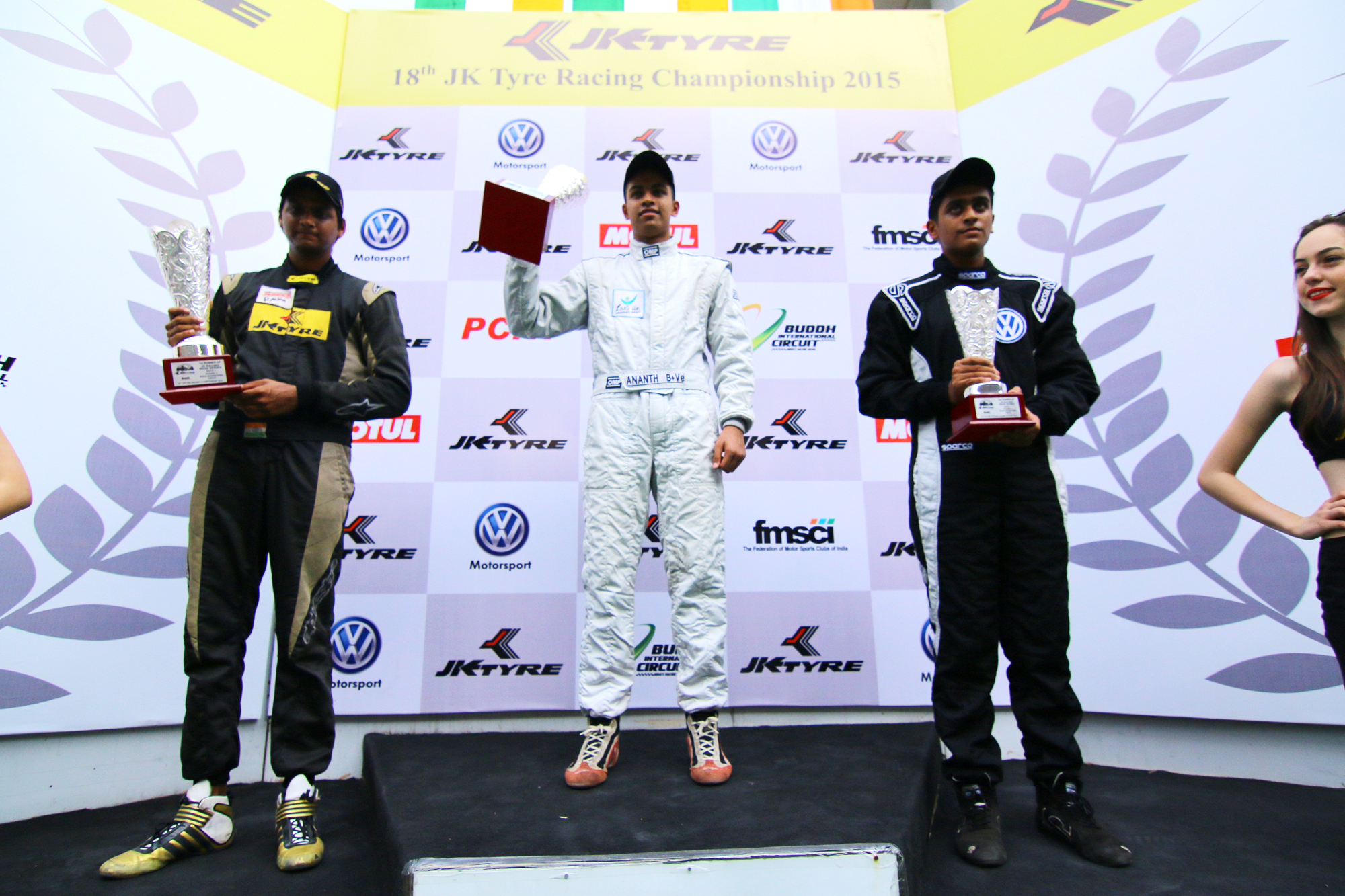 Greater Noida, October 17, 2015: The much awaited Round 3 of the 18th JK Tyre Racing Championship kick started at India’s only F1 track Buddh International Circuit. The racers were all geared up to take on the track and give their best to keep their lead in the championship. Two races of the Formula LGB 4 and a race each in the JK Racing India Series and JK Tyre-VW Vento Cup.

Race 1 of the Formula LGB witnessed some bumper to bumper racing. It wasn’t a good start to the weekend for pole sitter and current championship leader Ajay Kini. The Chennai lad who is a pilot by profession, lost out in the first two corners of the race and he retired from the race due to a technical snag. It was a constant battle between Delhi boy Rohit Khanna (Team Dark Don Racing) and Kolhapur boy Krishnaraj Mahadik (Team Dark Don Racing) for the first place as they were constantly charging at each other lap after lap. Rohit managed to regain his lead but as Anshul Shah spun, the safety car had to come out and stayed for a lap. The safety car changed the entire race. Rohit was caught up by Sandeep Kumar (Team Meco Racing) who drove brilliantly well to catch up the race leader and finally took the lead. However, a wrong move cost Rohit his second place and it allowed Diljith to move in to the second position and five other cars overtook Rohit. The fight for the third place became a five way fight which has not been seen in the championship in a long time. Rohit got a tough fight from Sudarshana Rao, Krishnaraj, Vishnu Prasad, Raghul Rangaswamy fought hard for the third position but as the chequered flag came out Vishnu Prasad from Chennai crossed the line by just having the nose of his car ahead of Krishnaraj who finished fourth.

Race 2 of the Formula LGB4, Ajay Kini was back in action and fought a tough race from start to finish. It was Ajay’s maiden race at the Buddh International Circuit and focused on finishing the race ahead of everyone. However, Sudarshana Rao Karwal from Bangalore was the surprise package and it was a roller coaster race for him as he kept swapping places with Ajay Kini on most of the laps. At the end it was Sudarshana who took the chequered flag followed by Ajay Kini. Raghul Rangaswamy from Chennai finished in the third place.

In the JK Racing India Series, Karting champion Ananth Shanmugam from Bangalore had a comfortable race as he lead from the start to finish. He ensured he kept a safe distance from his followers behind. The main action was for the second and third place. Karthik Tharani made his move to the third place after starting fourth. Two times champion Vishnu Prasad was on attack mode and had a great battle with Akhil Rabindra so much that they exchanged positions thrice. Their fight went to the extreme and Akhil lost traction and went off the track and Vishnu managed a second place finish. Karthik fell back too and Nayan who was in position number five moved ahead to take a surprise podium. For Nayan the hard work paid off as he started seventh and finished third.

In the JK Tyre- VW Vento Cup, Anindith Reddy from Hyderabad had a good start and ensured he stayed focused throughout the race to seal his first place finish. Last year’s runner-up Karminder Singh from Delhi who is vying for the overall champion title this year kept the pressure on. Nayan Chatterjee the podium finisher in the JK Racing India Series who was on his maiden outing in this category had a poor start and fell back to the tenth place. Harkisan Wadia from Delhi got stuck on the home stretch due to which the race was stopped. When the race restarted, Anindith resumed his lead and despite getting a tough competition from Hyderabad boy Ishaan Dodhiwala, Anindith smoothly took the chequered flag. Karminder due to his usual aggressive start finished third. The experienced Sailesh Bolisetti and the rookie Raghav Sharma fought really hard for the fourth place and in the end, Sailesh managed to cross the line ahead of Raghav.