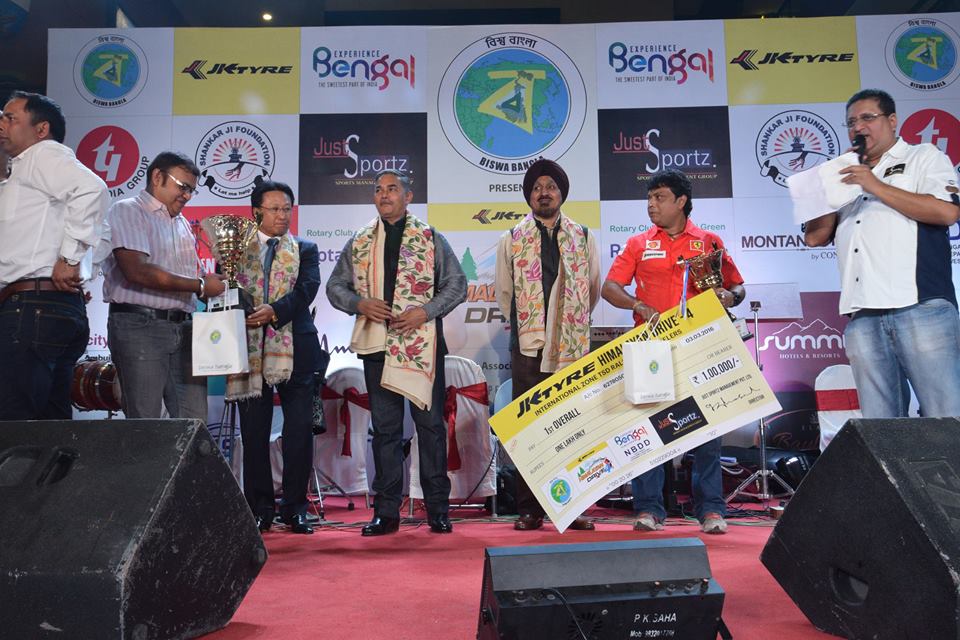 February 3, 2016: The much- acclaimed JK Tyre Himalayan Drive 4 ended in a photo finish on Tursday ith champions Sudip and Arindam Ghosh notching 568 penalty seconds, just eight seconds short of their closest rivals Jogendra Kumar Jaiswal and Prasenjit Roy who had a score of 576 penalty seconds. The other close call was between the third and fourth rankers--Pratik Sirkar and Debasish Ghosh who had a final score of 832 penalty seconds while Rajiv Sarkar and Chandu Sekhar followed close behind with 836 penalty seconds to finish fourth.

Though the champions—Sudip and Arindam Ghosh—had built a sizeable lead over their closest rivals on the first two days of the five-day rally, the only international TSD rally in India at present, they slipped in the last three days with many more penalty points than the Jaiswal-Roy duo. It was only the lead they established in the first two days that saw them through. The fortunes of Rajiv Sarkar and Chandu Sekhar kept fluctuating throughout the rally—they were in second position at the end of Day 1, slipped to third rank on Day 2, sank to fourth on the next two days, but did better on the last leg to ascend to the third position. However, their final scores placed them in the fourth position overall.

This fourth edition of Himalayan Drive, the only international TSD Rally in India at present, has drawn the attention of car rallyists across the country due to the varied, tough and picturesque terrain that the rally route covered and the international leg of the rally through Bhutan. The rally, which started from Siliguri’s City Center on Sunday, ended at the same venue on Thursday afternoon. The rally route covered the forests, tea gardens and riverbeds of North Bengal and the Dooars, narrow roads skirting the precipitous mountain slopes of the eastern Himalayas, the picturesque Paro Valley in Bhutan, a high mountain pass and the verdant, fog-enveloped Darjeeling Hills.

If Day 1 of the rally from Siliguri to Paro via Jaldapara and Hasimara   was a driver’s delight, Day 2 from Paro to Chelela Pass had the cars dodge past slippery and dangerous narrow ice-covered roads. Day 3 from Paro to Murti in the Dooars across 320 kms was a test of endurance for both man and machine.Day 4 saw Rally getting delayed due to a herd of elephants who wouldn’t budge from the rally route. A small eight-kilometer part of the rally route had to be lopped off and the rally started from the entrance to the Chapramari forests and through many tea estates before finally reaching the Queen of the Hills – Darjeeling -- via Jorebunglow. Day 5 was the easiest of all the 5 days as the Rallyists had 93 kms of drive down to Siliguri via Mirik, Bungkulung, Dudhia and Sukhna Forest. A total distance of 1050 kilometers across India and Bhutan was covered through 5 days.

Sudip Ghosh, the driver of the winning team, said: “The rally was tough and challenging. Driving in the high altitude and difficult terrain was thrilling. My driving mettle was put to severe test. Winning this rally brings to me a tremendous sense of achievement”. The winners were awarded a prize money of Rs 1 (one) lakh while the total prize money amounted to about Rs 2 (two) lakh.

Tamal Ghoshal, Director of Just Sportz, the organizer of the rally was upbeat with the success of the Rally as besides this being an Adventure Sports Event, it was aimed at betterment of relations between Bengal and Bhutan. The organizers said they took inspiration from the Hon’ble Chief Minister Ms. Mamata Banerjee’s vision of improving relations with neighboring countries through Motor Sports. “Taking a cue from this year’s success story, we are hopeful we would be able to take one step forward by adding Nepal too in our Rally Route thus making the fifth edition of Himalayan Drive a Tri Nation Rally,” said Ghoshal.