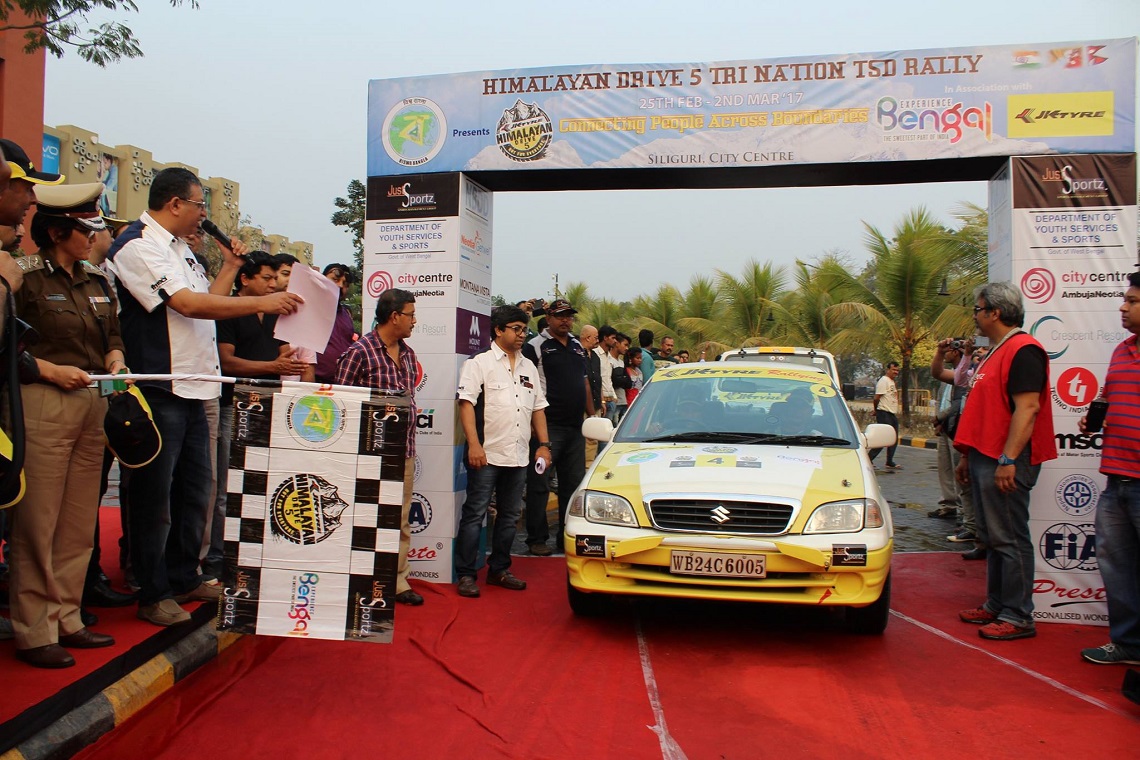 Siliguri,  25th February 2017:India’s first and only tri-nation rally gets under way here on Saturday, with as many as 100 top rallyists from around the country competing in this gruelling event over five days and 1250 treacherous kilometres.

The Biswa Bangla JK Tyre Himalayan Drive 5 will begin on Sunday morning, after the ceremonial flag-off on Saturday, and will traverse through the majestic mountains in Darjeeling Hills and various picturesque routes in Bhutan and Nepal.

While the TSD (Time, Speed and Distance) rally will test the skills and courage of the drivers and navigators, as also the mettle of their mean machines, it also aims to promote tourism and people to people connectivity between the three countries.

Unlike most other rallies, the JK HD-5 covers a wide variety of terrain, ranging from tarmac, river beds, dirt tracks, forest paths and mountainous roads. It will skirt steep slopes that makes it not only challenging but also dangerous for the participants.

Among others, national TSD champions Asgar Ali and Mohammed Mustafa, Nirav Mehta and Subir Roy and Saurav Chatterjee will be pitting themselves against the natural terrain as well as each other for glory.

“We are really excited about the HD-5. It is India’s only international rally that goes into two other countries,” Sanjay Sharma, the head of JK Motorsport, said. “This is not only be a great opportunity for our top rallyists but will also give a huge boost to the sport in all three countries,” he added.

On the first day, the rallyists will drive through North Bengal’s lush forests that are home to a rich variety of flora and fauna, including the Royal Bengal Tiger, the one-horned rhino and the Asiatic elephant, as well as past picturesque tea gardens before hitting the mountain road to Paro in Bhutan.

On the second, they will journey to Dochula Pass, situated at an altitude of 3100 metres, going past Thimphu, the enigmatic capital of Bhutan. They will then return to the quaint town of Paro that sits pretty in a valley surrounded by snow-capped mountains.

The rallyists drive back from Paro through the Dooars on the third day, and climb up the hills to reach Darjeeling, the ‘Queen of Hill Stations’. The fourth leg of the rally, on March 1, will see them driving from Darjeeling to Hile in Eastern Nepal.

The last leg will have them driving from Hile back to Siliguri, where the gala prize distribution ceremony will take place in the evening.

The JK HD-5 draws inspiration from chief minister of West Bengal Mamata Banerjee’s vision of ‘connecting Bengal’ to its neighbours and encouraging ‘people to people connectivity’ in the region.