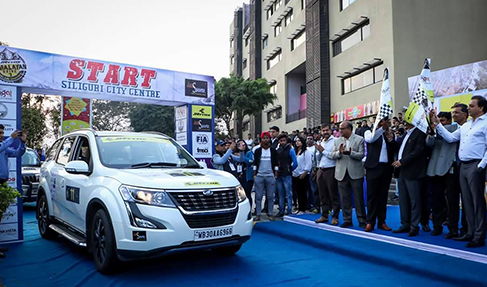 Siliguri, Feb. 26: :Over 50 top competitors from across the country are set to prove their mettle in India’s only multi-nation TSD drive that gets underway here on Wednesday morning.

The 800-km JK Tyre Himalayan Drive 7, which is being organised in association with Experience Bengal (West Bengal Tourism), will see the competitors drive their mean machines for four days through majestic locations in North Bengal, scenic hills in Darjeeling and various picturesque routes in Bhutan.

The TSD drive which draws inspiration from West Bengal chief minister Mamata Banerjee’s vision of connecting Bengal to its neighbours and encouraging people to people connectivity in the region, will cover a wide variety of terrain, ranging from tarmac, river beds, dirt tracks, forest paths to mountainous roads.

While the entire route will pose a great challenge to the competitors, it will test them to the hilt in Paro in Bhutan where the drivers might have to drive in extreme tricky conditions due to the impending snowfall prediction.

Sanjay Sharma, Head JK Motorsport, said, “We are really excited about the event. It is India’s only international TSD drive that provides a great opportunity to our top rallyists to stretch themselves to the limit, besides giving a huge boost to motorsports in the region."

The drivers will take-off from Siliguri post the ceremonial flag-off and travel all the way to Murti, driving past North Bengal’s lush forests, river banks and embankments and idyllic towns.

The second leg will see the drivers start their journey from Murti to Paro, going through tea gardens and forests that are home to a rich variety of flora and fauna, including the Royal Bengal Tiger, the one-horned rhino and the Asiatic elephant before entering Bhutan through Phuentsholing.

From Phuentsholing, the competitors will hit the mountain roads filled with hairpin bends and steep gradients that offer spectacular views of the Himalayan heights, before entering the breath-taking Paro Valley.

On the third day, they drive back from Paro Valley through Dooars and cross the iconic Coronation Bridge over Teesta river to reach Kalimpong.

The final leg of this rally on Saturday will have the competitors drive down from Kalimpong, cross the Teesta bridge, Mungpoo, Jorebunglow and Kurseong before descending into the plains through Rohini.

After reaching the plains, they will go through Dudhia and Panighata, the riverbeds of Menjha and Mechi, and touch Naxalbari before taking the Asian Highway 2 and then National Highway 27 to finish at the City Center at Siliguri, where the prize distribution will take place in the evening in a gala function.