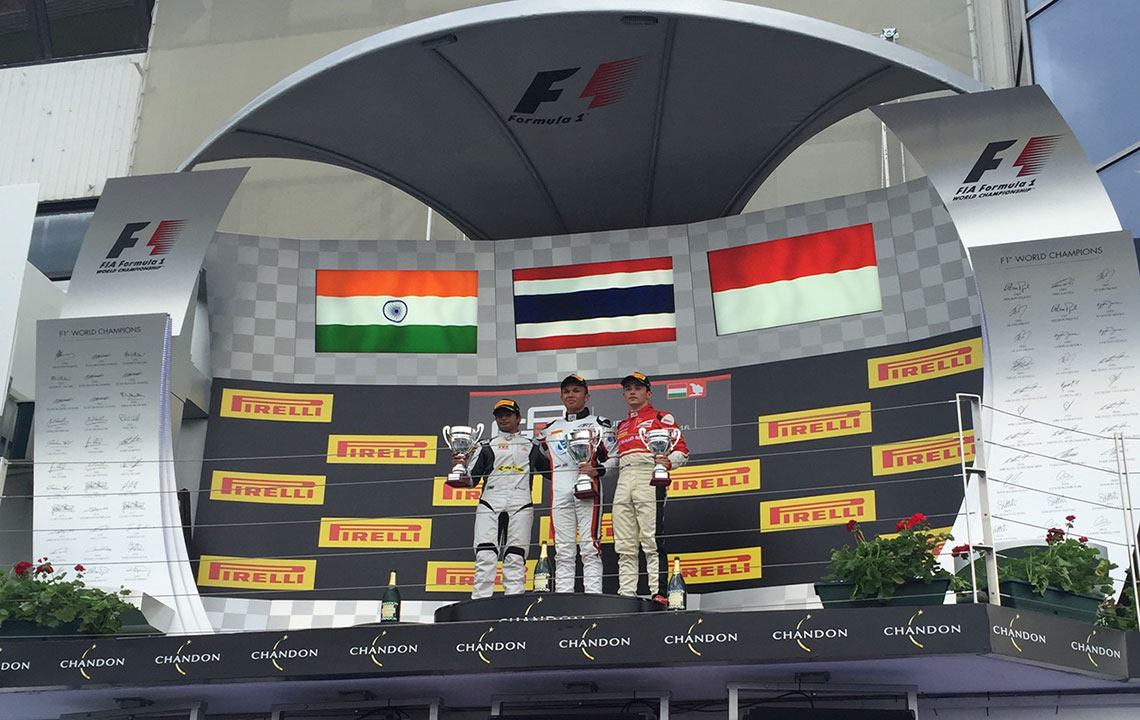 Budapest,  24th July 2016: In a landmark day for Indian racing, JK Tyre supported driver Arjun Maini secures a maiden GP3 podium in Hungary in his second weekend competing in the GP3 series. He becomes the first Indian racing driver to finish a GP3 race on the podium since the series began in 2010.

The free practice session indicated that Arjun had become more comfortable with the car, having spent more time in it since the previous race at Silverstone. This showed in his time on the track, finishing 10th with a best lap of 1:33.873. It gave the 19-year-old confidence going into qualifying on Saturday where he secured 9th position with a best lap of 1:33.874 after the session was red flagged when Steijn Schothorst of Campos Racing stopped unexpectedly on Turn 7, meaning he would start Race 1 9th on the grid.

Race 1 began with Arjun quickly moving up to the vital 8th place, granting him reverse pole for Race 2 if he finished in that same position. He met tough competition from behind with Jack Aitken of Arden International constantly putting pressure on him to make a mistake and allow the Brit to pass. But Arjun managed to stave off the pressure and held on for an impressive 8th place finish with a best lap of 1:36.844 to start on reverse pole in Race 2 for the second time in two races in GP3.

Race 2 began with Arjun being overtaken by Alexander Albon of ART Grand Prix in the first corner itself who then began to put some distance between himself and Arjun. But while Arjun continued to regain pole position, it became imperative to hold off other competition that came in the form of Albon’s teammate and Series leader, Charles Leclerc who made his way up the grid to challenge Arjun from 3rd. It was a sight to behold when the chequered flag dropped as Arjun crossed the line in 2nd place to take home a historic GP3 podium and his maiden podium in the series as well.

When asked about his first impressions of the car and the series as a whole after his strong start to the GP3 season, Arjun said “It's been a great experience with Jenzer. I've had quite a tough time the last two seasons and coming here I've already learned a lot. I work with really good people. I've got to thank my sponsors without whom I wouldn't be here: JK Tyre, TVS and of course my parents. It's been a really good experience. I think it's a fantastic Series for young drivers. You need to be able to adapt quickly here. The Pirelli tyres really teach you to extract what you can from there which is a great learning curve.”