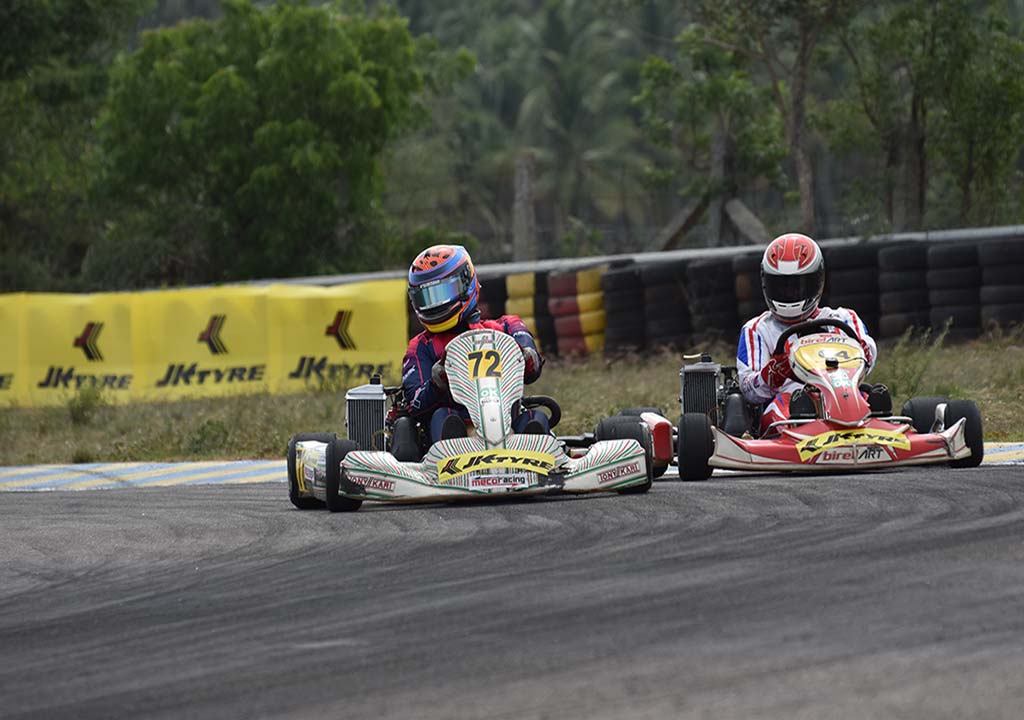 Coimbatore,  16th July 2016: Championship leaders Ricky Donison, Manav Sharma and Shahan Ali Mohsin sparkled in the heats in their respective categories here at the Kari Motor Speedway to grab provisional pole positions for the pre-finals and finals of the Third Round in the JK Tyre-FMSCI National Rotax Karting Championship on Sunday.

Donison (BPC Racing) in the Senior Max class (above 17 years) and Shahan Ali (Meco Racing) in the Micro Max (7-12 years) won both their heats on a pleasant Saturday afternoon to underline that they are primed for more success on the big day tomorrow. Donison, who is fast becoming the driver to beat this season, clocked the fastest lap at an impressive 37.004 seconds, on the day that saw intense practice rounds and qualifying rounds in the morning before the stage was set for the heats.

Donison is the runaway leader with 165 points after the first two rounds and seems set to widen his lead in the championship. Ameya Bafna (Rayo Racing) and Vishnu Prasad (Meco Racing), who are breathing down his kart with 164 points, will have to work that much harder on Sunday as they have fallen behind in the grid to start at the third and fourth position. Dhruv Mohite (Mohite’s Racing) grabbed the second place after finishing second in both the heats.

Young Shahan Ali of Meco Racing in the Micro Max category proved that he is the driver to watch out for as he jumped into the lead in both the heats and stayed there all the way till the chequered flag in both the heats. The 12-year-old is ahead in the race for the title with 173 points and showed amazing calm and skill behind the wheel as he attacked the curves. Rehab Alva (Peregrine Racing), who was chasing Shahan Ali with 169 points, didn’t have a great day as he finished fourth in the first heat and seventh in the second. He has fallen back in the grid to the seventh position.

Aadityansh K of Rayo Racing snatched the advantage of starting from the second position by coming second and sixth in the two heats. He showed pace though, clocking the second fastest lap at 42.671, just behind Shahan Ali at 42.666. Yeasash More (BPC Racing) will start at third while Arjun Nair (Meco Racing) at fourth place.

The Junior Max heats proved to be much more close and exciting with Manav Sharma (Rayo Racing) and Chirag Ghorpade (BPC racing) swapping the first and second places in the two heats. That was good enough for championship leader Manav (173 points) to win the honour of starting at pole position. Chirag Ghorpade (BPC Racing), Nirmal Umashankar (Meco Racing) and Mira Erda (ERDA’s Racing) will follow him on Sunday.