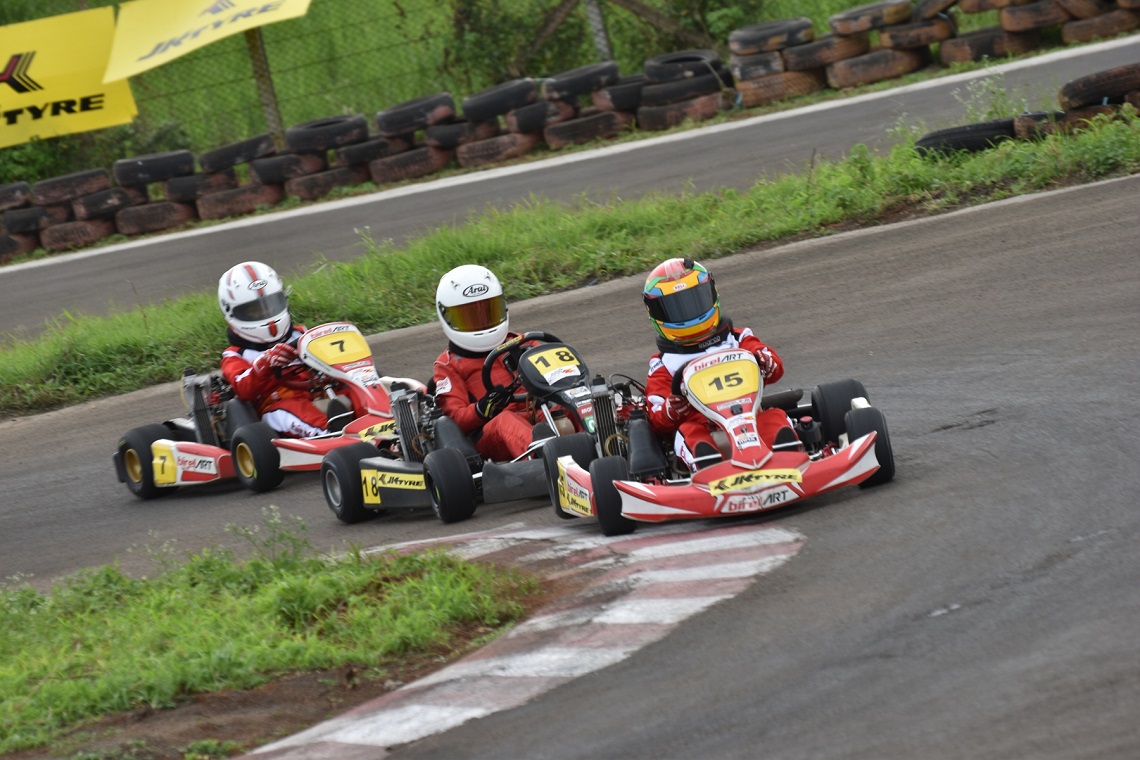 Kohlapur,  19th August 2016:: High octane racing will return to Kolhapur after a year’s gap, with the fourth and penultimate round of the 13th JK Tyre-FMSCI National Rotax Max Karting Championship scheduled to take place at the state of the art Mohite Racing Academy over the August 20-21 weekend.

The round promises an exciting fare with all eyes set on Ricky Donison of BPC Racing who has been in supreme form throughout the season. Bengaluru’s Donision with a tally of 252 points is leading the charts, and will aim for an encore, that not only will maintain his 100% record this season but also consolidate his position at the top.

However, it will not be an easy run out there for Donison, as he will be up against a strong challenge from Chennai’S Vishnu Prasad of Meco Racing (247 points) and local lad Dhruv Mohite of Mohite Racing (243). Both the drivers will be go out all guns blazing and aim to narrow the gap at the top. Dhruv will perhaps fancy his chances a little more as he will literally be racing in his backyard, being a Kolhapur racer and also the owner of the Mohite Racing Academy track.

JK Motorsport’s president Sanjay Sharma believes that this round may well be the most critical one for the championship. “All the racers know that a big prize awaits them if they win the national championship. They will be rubbing shoulders with 360 of the finest racers from 50 nations,” he said.

In the Junior Max (for kids between 13 and 16) and Micro Max categories (for kids between 7 and 12), Manav Sharma and Shahan Ali are in much more comfortable positions, with 9-point and 16-point leads. Manav of BPC is ahead with 257 points, having won the first round and taking the fourth and second positions in subsequent rounds. But Meco’s triumvirate of Nirmal Umashankar (248 points), Yash Aradhya (240) and Paul Francis (231) will surely come up with a joint strategy to unseat him from the leader’s position.

Twelve-year-old Shahan, who suffered some bad luck in the Rotax Euro finals over the last weekend and finished 29th, has reason to believe that life will be much easier back home: he might even believe that the Micro Max championship is almost in his pocket. He has been virtually untouchable in the earlier three races and is sitting pretty on 262 points. Ruhaan Alva (246) of Perigrine, Arun Nair (241) of Meco and Arjun R (239) of Birel Art can only hope to fight for the second and third positions.

The action will begin at the Mohite Academy on Saturday with practice rounds in the morning. The four races in each of the categories will take place over the weekend, the first two each on Saturday and the last two each on Sunday, with drivers from across the country ready to burn rubber.

Championships standings after Round Three