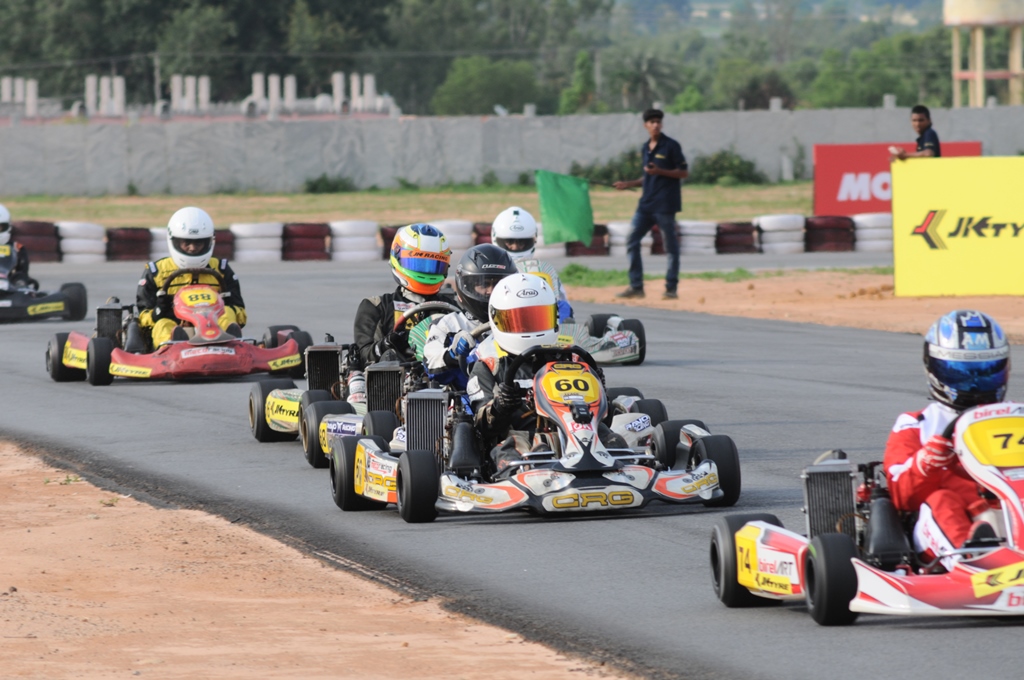 Bengaluru , 4th June 2016 : Bumper-to-bumper action providing for thrilling and close racing marked the heats in the various classes in the opening round of the 13th JK Tyre - FMSCI National Rotax Championship at the Meco Kartopia.

As the official practice session got underway in the morning, it became clear that the top favourites would be the drivers to beat. Right through the day, the lap times came down as they got used to the conditions and the track became faster.

The highlight of the day were the heats in each of the three classes – Micro Max (7-12 years), Junior Max (13-16 years) and Senior Max (above 15 years) – that will decide the starting order for the pre-finals and finals.

In Heat 1 of the Senior Max class, defending national champion Ricky Donison of BPC Racing threw down the gauntlet with a comprehensive win after shooting into lead in the first corner even as Nayan Chatterjee of Meco Racing tried his best to catch the leader. The Meco Racing driver pulled off a smart overtaking move over second placed Dhruv Mohite going into the first corner to slot into second, which he retained till the end. Former champion, Vishnu Prasad pulled off the move of the race on the sixth lap when he out-braked Mohite to slot into third before opening up a sizable gap. But on the 12th lap, Prasad suffered a spectacular stroke of bad luck when he picked up a puncture that forced him to retire handing back the third place to Mohite.

In Heat 2, Ricky Donison was once again the man to beat. Once the green flag was waved, Ricky put in a good first lap and opened up a 5 kart length gap which remained the same till the end of the race. Nayan Chatterjee in a repeat of the first heat, finished second, while Ameya Bafna of Rayo Racing improved upon his fourth place in the first heat to take third, thus improving his starting order for the pre-finals on Sunday.

In the Junior Max category, Yash Aradhya asserted his authority in the first heat after taking lead going into the second corner of the opening lap. Once he got his nose ahead, he opened up a huge gap on the chasing pack. Behind him, Chirag Ghorpade finished in second place quite comfortably. But for the third place there was an intense fight involving Paul Francis, Nirmal Umashankar and Manav Sharma. After being bottled up behind Sharma for 14 laps, Francis pulled off a blinding overtaking move going around Sharma at Turn 10 to slot into third to the chequered flag.

In the second heat, it was Yash Aradhya of Meco Racing once again all the way, dominating the proceedings, with Chirag Ghorpade of BPC Racing in second place. For third place, Manav Sharma made up for the disappointment of the first heat, to take a hard fought third place.

The pre-finals and finals of the 13th JK Tyre FMSCI National Rotax Championship will be webcast on: Jktyremotorsport.com/rotaxlive from 11.30 AM onwards