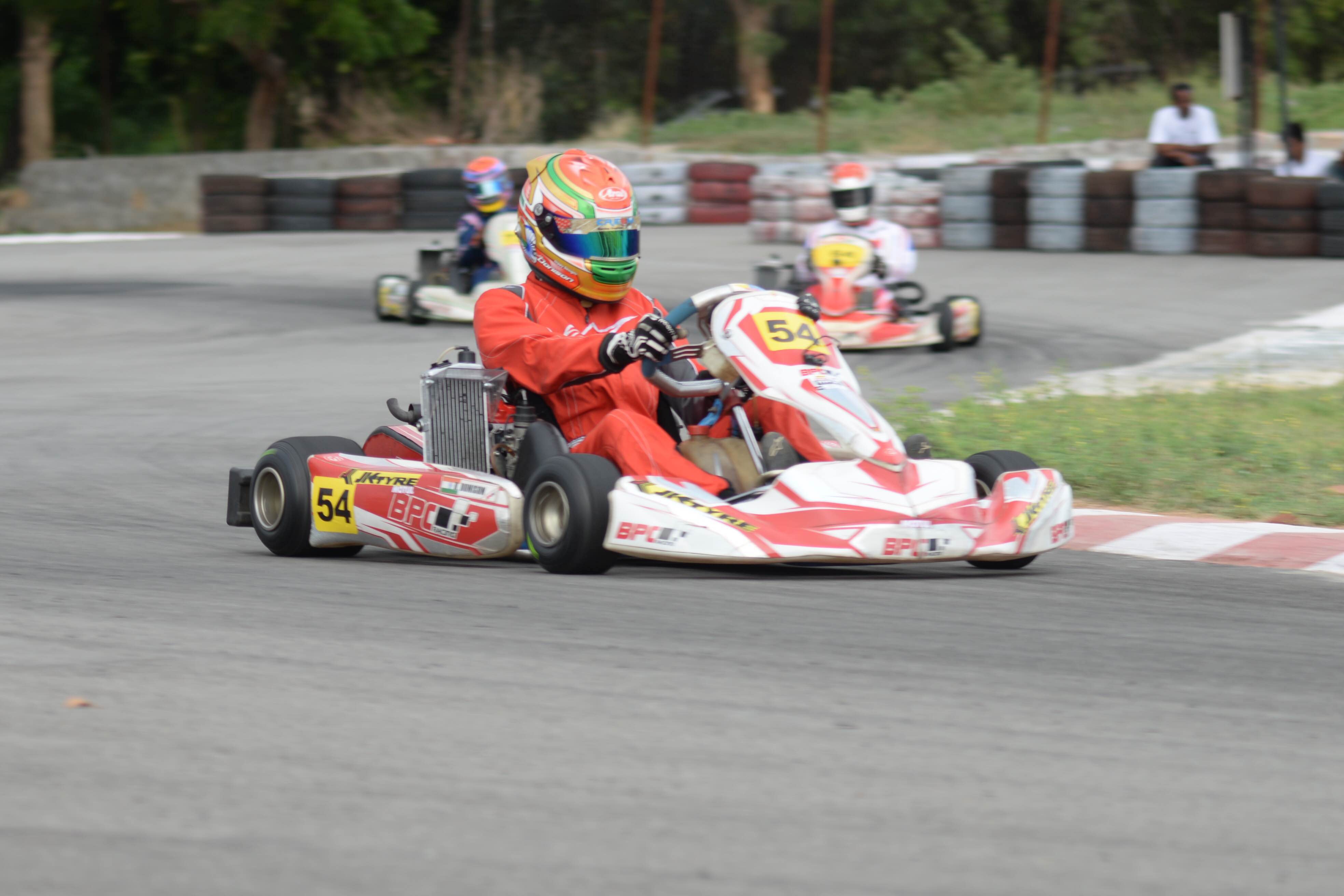 Hyderabad,  26th June 2016: Brilliant racing up and down the grid in all the three classes lit up the Chicane circuit at the Leonia Resort in Hyderabad in the second round of the 13th JK Tyre-FMSCI National Karting Rotax Championship. The pre-race favourites justified their top billing in the two heats as the 1.2 km circuit reverberated to the high-pitched note of the two-stroke Rotax engines operating on the limit.

On the first day of the second round of the JK Tyre-FMSCI National Rotax Karting Championship, defending national champion in the Senior Max class (above 16 years), Ricky Donison, carried over his fine form from the first round in Bengaluru to throw down the gauntlet for the rest of the chasing pack. Donision of BPC Racing won the first heat by a margin of over 1.1 second.

Behind the winner, Dhruv Mohite of Mohites Racing, starting from third place, got the better of Nayan Chatterjee of Meco Racing in the first corner scrap. Once the Kolhapur-based driver got ahead of Chatterjee, he had to work hard to keep the Meco driver behind him. For good part of the 15 lap race, Chatterjee remained on the bumper of Mohite’s kart, but never managed to find the space to overtake him.

In Heat 2, Donison once again came up with an imperious drive as he led from the start to the flag. Mohite bagged a distant second place more than 2.2 seconds behind the winner. However, there was a race-long dogfight that played out between Ameya Bafna of Rayo Racing and Chatterjee. Starting behind the Meco Racing driver, Bafna pulled off a blinding overtaking manoeuvre on Chatterjee on the first lap that helped him to slot into third place, which he defended right to the end.

In the Junior Max class (13-15 years), Yash Aradhya, who was struck down by bad luck in the first round, set the tone of the race from pole position after fending off early charge from championship leader, Manav Sharma. Though, Sharma had a couple of close look-in in on the 5th and 7th laps, he never really could find a way to get past the race leader. Behind the top two, Paul T Francis had to summon all his experience to keep Jonathan Kuriakose behind him.

In the second heat, Aradhya once again dominated the proceedings from the start to flag, while Manav Sharma maintained a clean run for another second place finish. Jonathan Kuriakose of Rayo Racing won his battle with Francis in the second heat to claim a well-earned third place.

The first heat of the Micro Max class produced a scintillating race that saw the two favourites, Ruhaan Alva and Shahan Ali Mohsin, slugging it out for the entire duration of the 10-lap sprint. Alva, who qualified ahead of Mohsin, managed to protect his position going into the first corner, but then had to deal with intense pressure piled on the by the championship leader. Arjun S Nair, also of Meco Racing, finished in third place.

In the second heat, Alva once again came out on the top after taking early lead, which never really came under any threat. But behind the winner, Mohsin had to work hard after failing to make one of his trademark blistering starts. It took him three laps to overtake Nair to earn a hard-fought second place. Nair for the second time in the day finished in third place.