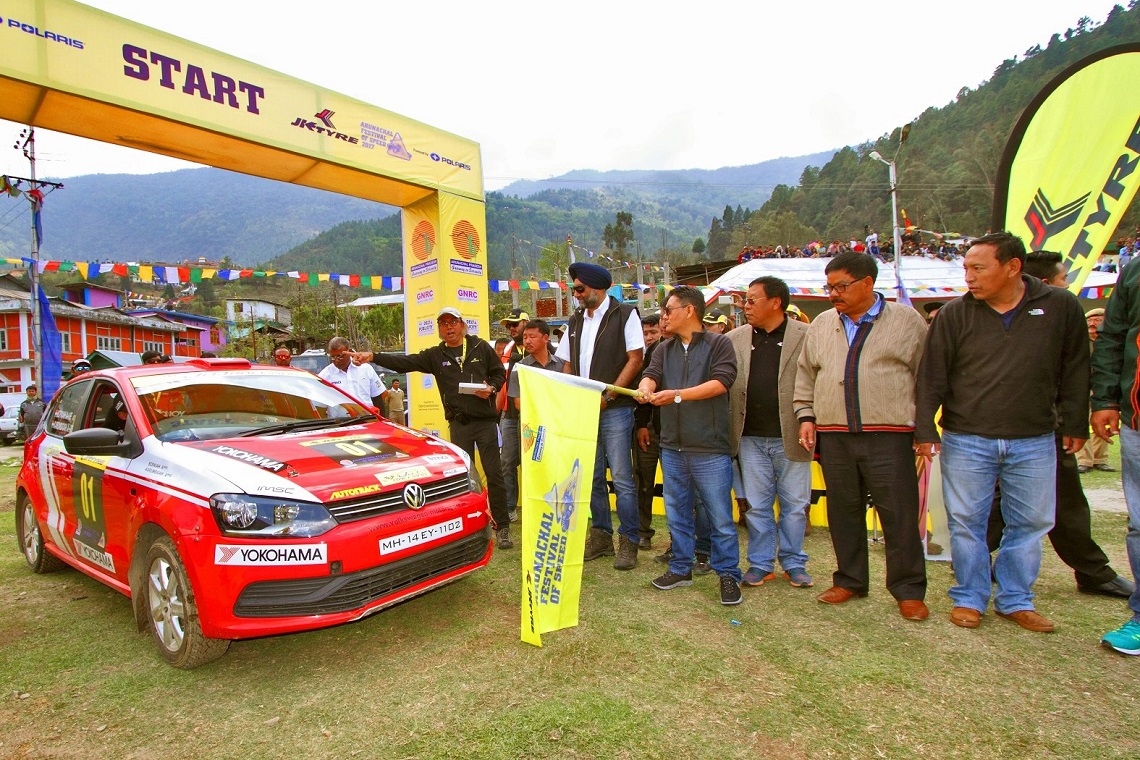 Dirang Valley (Arunachal Pradesh),  15th April 2017:National autocross champion Amanpreet Ahulawalia once again underlined his class and mastery in Super Special Stages as he jumped into the lead on the first day of the JK Tyre Arunachal Festival of Speed here on Friday.

On a beautiful day out here in the breathtaking Dirang valley, Amanpreet was in his elements in his Maruti Gypsy as he tackled the slippery grass track at the L’Opon Stadium to delight a packed house. He needed just 2.09.32 minutes to complete the zig-zagging course but the tougher part was staying in control without sacrificing any speed.

“It was fun racing on this tricky course,” Amanpreet, a veteran rallyist from Delhi, said. “We are happy that we have taken the early lead. There is still a long way to go and we hope to drive on this momentum through the weekend,” he added.

The top seeded racer among those in classified cars here, KM Bopaiah from Coorg, had to settle for the second place in his 1600cc Vento. He was off the top mark by just 3.15 seconds but looked in good touch during the short burst. Delhi’s Sandeep Sharma was not much slower, needing only an additional 1.17 seconds to complete the course, to stay firmly in the hunt.

In the Auto Cross and Sprint Cars for local talent, Babit Lyngdoh shot into the lead, winning both his rounds on Friday. He was wildly cheered in the second round after outclassing a strong seven-car field in the morning, taking an impressive 2.15.41 minutes to finish the course. He didn’t let his fans down, this time finishing the same distance in 2.13.30.

As a new year dawned across the country, the little village of Dirang too celebrated it in its own unique way, as it has been doing over the last three years: partaking in the Festival of Speed, supported by the government of Arunachal.

Right from the morning, little boys and girls and young men and women repaired towards the stadium in their festive best. The setting assumed even more grandeur thanks to imposing mountains enclosing the stadium from all four sides.

A heart-warming state of happiness and cheer settled on the stands by the action began a little after 12, with silvery clouds floating in the sky.

The next days promise to be even more gripping as the event enters its more demanding Special Stages. The organisers have lined up nine different sections, hoping to not only provide raw excitement to the spectators but also to test the country’s best rallyists in different and trying conditions.

With a prize money of Rs 10 lakhs up for grabs, the highest for any rally in the country, the drivers can expect a lot more than just the thrill of racing.