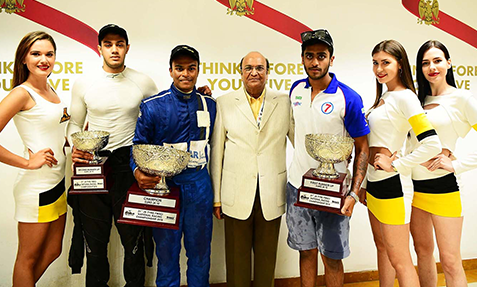 New Delhi, Nov 18: On a day of dramatic twists and turns, the Chennai duo of Karthik Tharani and Raghul Rangasamy clinched the coveted Euro JK 2018 and LGB Formula 4 titles in the 21st JK Tyre FMSCI National Racing Championship at the BIC here on an action-packed Sunday.

Over 35,000 delighted fans roared as the Euro JK began shortly after a mind-boggling stunt show led by UK’s Terry Grant and Lithuania’s Aras Gibieza, with Tharani and Mumbai’s Nayan Chatterjee tied on 89 points and everything coming down to the last 10 laps.

A fitting finale was on the cards, with the reverse grid too coming into play and adding to the drama. Nayan and Karthik commenced from behind, from sixth and fifth position, making their task that much tougher.

Nayan, however, suffered a massive blow at the start of the second lap itself, colliding with Manav Sharma and pulling out of the race.

It left the field wide open for Karthik, allowing him to steadily get past the field to win the race as well as the championship. Nayan had to be content with the second place while Ashwin Datta, who had been leading after each of the earlier rounds, finished a disappointing third.

The LGB Formula 4, which has been exciting all through the season, was equally dramatic, with defending champion Vishnu Prasad being upstaged in the last race. With a clear 6-point lead, the MSport veteran simply needed to drive smart but he lost the plot and fell behind midway through the race.

This opened a window of opportunity for his teammate Raghul Rangasamy, even though he was lagging six points; he made a successful charge and finished second, which landed the championship in his lap. Vishnu picked up just one point, forcing him to yield the title to his teammate.

“I didn’t know I had won the Championship when the podium ceremony was taking place,” Raghul said at the press conference. “I got to know only after I came to the pits. It’s an amazing feeling to be the national champion,” he added.

Delhi’s Rohit Khanna took the race but it was good enough to give him only the third place.

Aizawl’s Malsawmdwngliana won the last Suzuki Gixxer Cup, claiming the second place in the overall run. Chennai’s Joseph Mathew hung on to his lead and the Cup, despite having his worst round.

The packed stands enjoyed the great carnival-like atmosphere at the BIC, involving karting by 10-year-olds, a stunning tractor act and a live musical programme by Punjabi pop sensation Jasmine Sandlas.