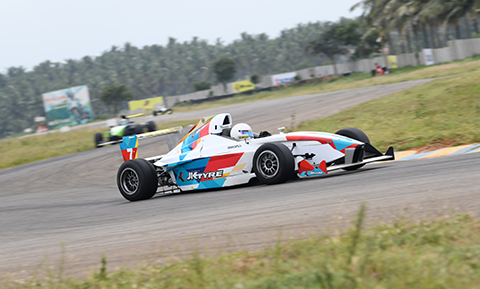 Coimbatore, October 12: Round 3 of the 21st JK Tyre FMSCI National Racing Championship will roar to life here on Saturday, with the Chennai trio of Ashwin Datta, Vishnu Prasad and Joseph Matthew looking to consolidate their positions on the leaderboard.

Ashwin, who had surprised everyone with speed and guile this season, has managed to stay ahead of the pack with three podium finishes in the Euro JK 18 category. He (51 points) will be looking anxiously over this shoulder as he has a slender two-point lead.

Nayan Chatterjee (49 points) was breathing fire in Round 2 and will be keen to carry that momentum forward to stake his claim for the championship in the final round next month.

"The championship has reached a very exciting stage, with anyone capable of winning in each of the championships," Sanjay Sharma, Head of JK Motorsports, said. "It is going to be an intense battle this weekend," he added.

In the LGB 4 category, MSport's Vishnu was at his imperious best in the last round, winning two races and finishing second in one to gather a total of 28 points. With a total of 50 points from two rounds, he will look to go for the kill and widen the gap further at the top. Vishnu, however will be wary of his buddy and team-mate Raghul Rangasamy who is not to far behind him at 45 points.

In the JK Tyre Novice Cup, all eyes will be on 14-year-old Tijil Rao of Momentum Motorsports, who annexed his maiden win to end the round with 13 points. He is currently sitting on the third spot in the championship standings. Tijil's teammate Siddharth Mehdiratta is currently leading the standings with 16 points, but Viswas Vijayaraj (15 points) is fiercely on his tail.

Defending Champion Joseph Matthew of Chennai continues to rule the Suzuki Gixxer Cup. He is is yet to drop a point in the championship and has four wins out of four for a grand total of 40 points in his kitty. He will be the man to beat once again.

TOP THREE RESULTS AFTER ROUND 2 (Each Category)