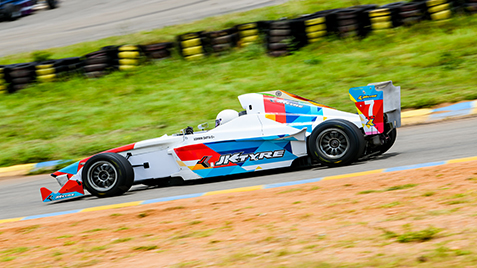 Coimbatore, September 2:Chennai’s Ashwin Datta emerged as the hero of Round 2 of the JK Tyre FMSCI National Racing Championship here on Sunday, setting the stage for a thrilling three-way tussle for supremacy in the Euro JK 2018 category.

Chennai’s Vishnu Prasad and Joseph Mathew continued to hold sway in the LGB 4 and Suzuki Gixxer categories while 14-year-old Tijil Rao jumped into the spotlight by winning his life’s first race.

Aizawl’s Jerome Vanlalrengpuia booked his trip to Spain for the Red Bull MotoGP Rookies Cup qualifiers next month. Jerome posted the fastest timing in the qualifiers over the two rounds of Red Bull Road to Rookies.

He finished on 32 points along with PC Andy Lalhmangaihsanga, who clinched Race 2.

The Euro JK races had the packed stands on the edge of their seats as Ashwin Datta, Nayan Chatterjee and Karthik Tharani went all out for the top position on the championship leaderboard.

Level on 43 points each before the weekend’s final race, Ashwin proved to be the man with nerves of steel. He won the morning race and claimed the second place in the afternoon to take a wafer thin lead of one point, with 50 points in his kitty.

Mumbai’s Nayan Chatterjee surged to the second place by amassing 29 points over the weekend. He struggled with his car but still managed to finish second in Race 3. He began on P10 in Race 4 and moved to the fifth before inching up to the third place. He now has 49 points after his two victories on Day 1.

Karthik Tharani is right on their tail with 48 points.

Seasoned racer Vishnu (MSport) began with yet another command performance in the LGB 4 on Sunday. Starting from P7, thanks to the reverse grid, he quickly made his way past the traffic to clinch Race 2 with 5.9 seconds to spare.

He was, however, up against it in Race 3, with teammate Raghul Rangasamy and Rohit Khanna (Dark Don Racing) outmanoeuvring him early on. Vishnu went for the kill in the final lap and dislodged Rohit but couldn’t deny the wily Rangasamy a much-deserved victory.

Rohit took the third place in both the races.

The JK Tyre Novice Cup saw a thrilling finish, with the safety car foiling Vishwas Vijayaraj’s (DTS racing) attempt for a double in virtually the last lap. As the cars regrouped and went for broke, Ashwin Nair and 14-year-old Tijil Rao sandwiched Vishwas, and left him in their trail.

But Ashwin was slapped a 10-second penalty for avoidable collision, which saw him tumbling down to the eighth place. It gave Tijil, a young racer who was born with clubfoot and had to be operated upon twice just to walk normally, grabbed his first ever victory at this level.

Chennai’s Joseph Mathew continued his unbeaten run in the Gixxer Cup, winning his fourth race on the trot. Syed Muzammil Ali and Malasawmdawnglama took the other two places on the podium.