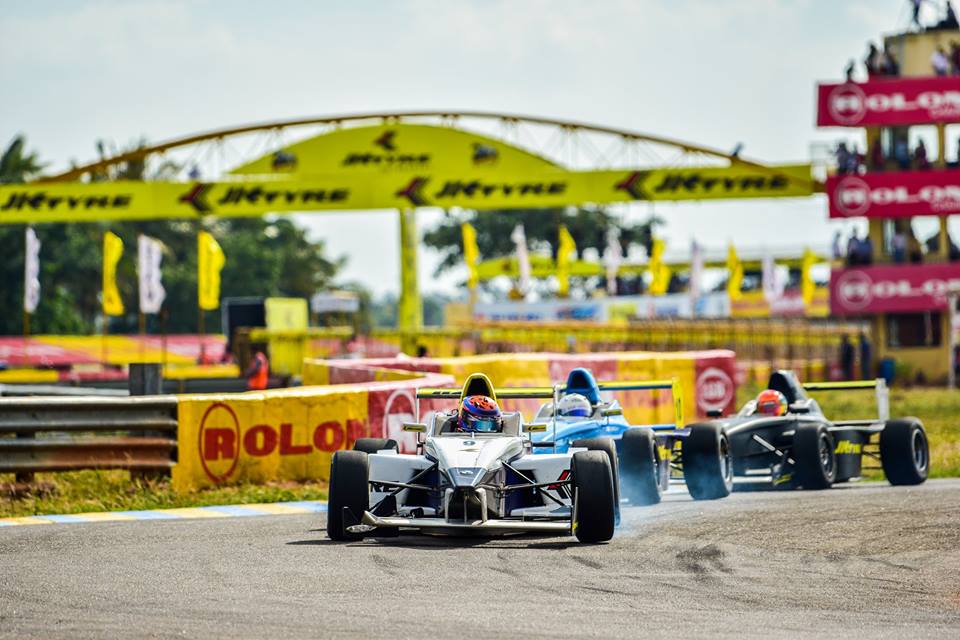 Coimbatore,  2nd September 2017:Mizoram’s Lalhruaizela virtually grabbed the ticket to the Road to MotoGP in Spain by finishing second in Round 3 of the 20th JK Tyre FMSCI National Racing Championship 2017 here on Saturday.

The 15-year-old biker collected the maximum possible 10 points on Day 1 of the weekend to take his tally to 48 points, a full 12 points more than his stalemate Lalnunsanga.

The blue riband event of the championship, the Euro JK 17, was meanwhile flung open with defending champion Anindith Reddy storming to the top of the table.

Starting a solitary point behind Vishnu Prasad, Hyderabad’s Anindith showed his speed and class to amass 15 points. He took full advantage of the reverse grid in Race 2, as he began on Pole 2, to win the race and the maximum possible 10 points.

He was penalised by 10 seconds for a false start but that didn’t affect him, as he had won the race by a clear 15 seconds. In the first race too, he suffered the same fate (for overtaking during a yellow flag) to slip from his second-place finish to fifth. It still fetched him 5 points and the advantage in the day’s last race.

Chennai’s Vishnu, on the other hand, had a disastrous run: he failed to finish in both the races and returned with no points. That allowed Mumbai’s Nayan Chatterjee to creep up by turning in third in Race 1. He, however, couldn’t finish Race 2 that hurt his chances to further move up the ladder.

In the Suzuki Gixxer Cup, Chennai’s Joseph Mathew continued his winning run, notching up his fifth straight victory. He is sitting on 50 points now, with the rest of the field nowhere near him.

The LGB Formula 4 proved to be the highlight of the day, with some great overtakings, some fierce defending and even the safety car coming out twice. Kolhapur’s Chittesh Mandody (Avalanche Racing) regained the upper hand winning the race in a spectacular way. Tied with Prasad (MSport) at 42 at the start of the day, Mandody absorbed tremendous pressure to ward off the pack behind him

Prasad pushed him all the way till the end but just couldn’t get past him. He settled for the third position and a useful 6 points to stay in the hunt. Dark Don Racing’s Rohit Khanna crashed into the party for the second position but with just 20 points he has a lot of catching up to do in the remaining three races.