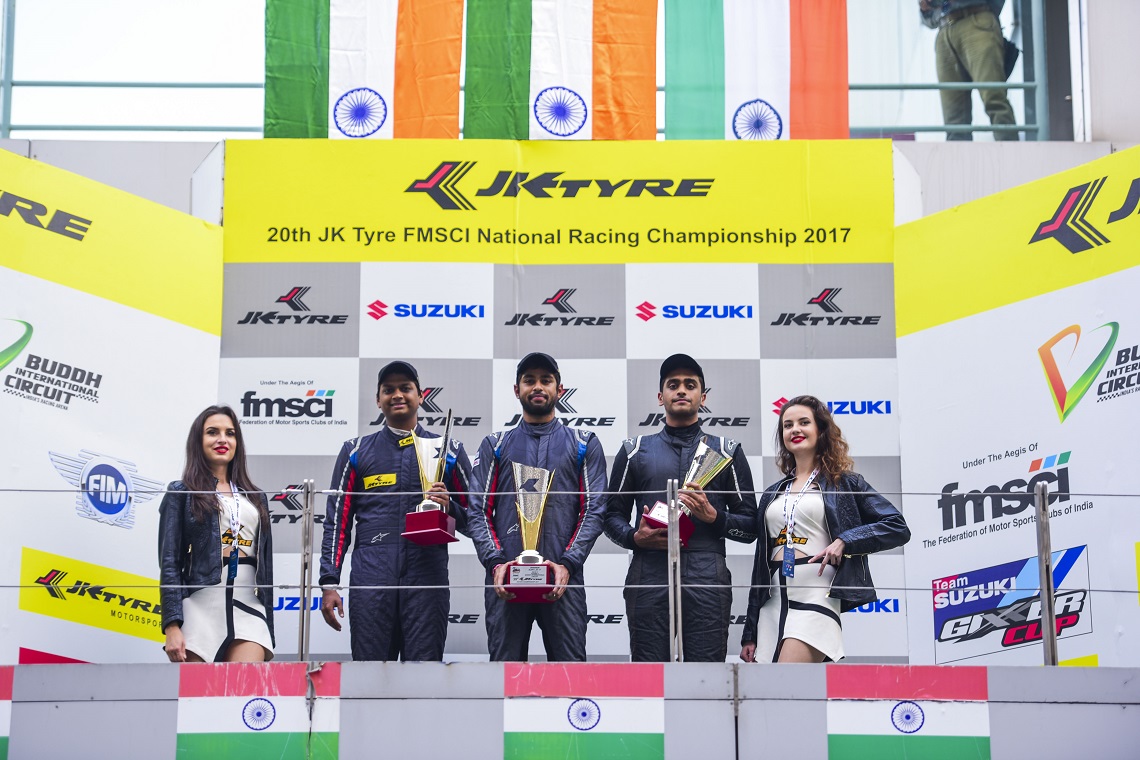 The LGB Formula 4 championship, however, took an exciting turn, with overnight leader Avalanche Racing’s Chittesh Mandody with 62 points managing only one podium finish on a day of mini upsets. Sandeep Kumar of Dark Don Racing won the first race and clinched the second place in the second to move up to 60 points, just 13 points behind the leader.

India’s Sai Rahil Pillarisetty (from Hyderabad), Israel Vanlalhruaizela and Lal Nunsanga (both of (Aizawl) took full advantage of the home conditions to take all the three podium places in the Asian Road Racing Championship, a new addition to the championship.

Chennai’s Joseph Mathew, who had been virtually unbeatable in the first rounds, lost once again in the Suzuki Gixxer Cup. But he had already collected enough points to be safe and his second-placed finish is not going to hurt him.

In the JK Super Bike 1000cc category, Simranjeet Singh turned out to be a class apart, as he comfortably won the 8-lap race. He took 16:10.408 minutes, recording the fastest lap time of 2:00.289 minutes in the fifth.Dilip Lalwani and Deepak Ravi Kumar finished second and third respectively.

In the JK Super Bike 600cc category, Gurvinder Singh warded off a stiff challenge from Vijay Singh and Anand Nagarajan to take the early lead. He won the exciting race 10:29.772 minites.

Hyderabad’s Anindith Reddy was in regal form in the Euro JK 17, winning both his races with more than four seconds to spare. He notched up an amazing average speed of 148 kmph in Race 2 to leave the field gasping, despite the reverse grid coming into play.

In the first race too, he was equally imperious, although he later conceded that he was struggling with the car in the first four laps. “I was cautious in the beginning, especially with Vishnu and Nayan breathing down my neck. But by the fourth lap I got into my groove,” Anindith said.

Both, Vishnu and Nayan conceded that Anindith was impossible to catch. “Anindith has proved that is in brilliant touch. But we are not going to give up; we will give him a fight tomorrow,” Nayan said.