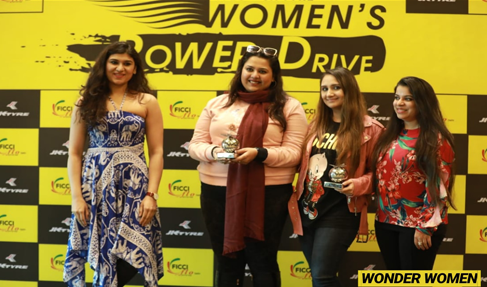 New Delhi/Gurgaon Feb 5: : JK Tyre Young FICCI Ladies Organisation Power Drive was successfully held here on Tuesday, with over 100 young women bringing some of the iconic roads in the national capital to life as they sped along in their luxurious sedans and SUVs.

The unique rally, held in the standard TSD format under FMSCI guidelines, was a first of its kind drive to promote the idea of motorsports among women. Held in collaboration with FICCI, it is in line with JK Tyre Motorsport’s vision of encouraging ladies to take up this exciting sport.

Members of the Young FICCI Ladies Organisation (FYLO) lined up enthusiastically at the FICCI House early in the morning, eager to get a feel of the sport in all its competitive glory and understand its nuances.

FMSCI’s chairperson of the ladies’ wing, Ms. Sita Raina, flagged off the rally, in the company of Mr. Vikram Malhotra, Director Marketing JK Tyre, and Mr. SrivatsSinghania, Director, JK Organization. The ladies coursed through Copernicus Marg, Outer Ring Road and NH 44, and were cheered on by gallant onlookers along the route.

The 50-kilometre challenge, with eight time controls, tested the ladies’ driving and navigational skills to the hilt and drew to a close after 3 hours at the ITC Bharat in Gurgaon, Haryana.

The winners were handed their trophies by LGB 4 driver and fastest lady of India Sneha Sharma, who also gave an inspiring rendition to the participants during the prize distribution ceremony.

"It was really wonderful to see so many women coming out on a weekday to participate in the drive. It has always been our aim to promote motorsports amongst women and we believe we are on the right track. After this drive, we have two more all-women’s events coming up in the next few weeks and we are quite sure we will be able to reach our objective and attract more enthusiasts to the sport," Mr. Sanjay Sharma, head JK Motorsport, said.

Ms. Sita Raina lauded the efforts of JK and FICCI in making the drive a success and believed that events like these would surely make motorsport more exciting among women. "I am really glad that JK Tyre has come up with this initiative. FMSCI and JK Tyre are fully committed to promoting motorsports among women and we will definitely come up with more events like these," she said.

"It was a very interesting event and we are really glad with it success. YFLO is all about women empowerment and something like this helps a lot towards the cause. We are glad that we could enter into a collaboration with JK Tyre. Big thanks to them for their initiative in promoting motorsports and we are really looking forward to the next edition," said Ms. AtashiSinghania, president of YFLO.

The next initiative of JK Tyre to promote the sport amongst women is the Drive from Delhi to Chandigarh on Feb 16th and the Rally to the Valley from Mumbai to Lonavala on March 3rd.